Editor’s Note: This is a slightly revised version of a post written in 2012 for a now defunct website. By using the “editor’s note” prefix and talking in third person, it is obvious I am not the author of this blog, but it’s editor. In no way are we the same person. 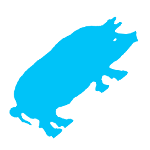 The Overview
Grunter is more than a new social network communication API web 3.0 paradigm template. Grunter is the new. The sun is setting on Twitter, and Grunter is the force of gravity directing that sun to crash into it. Grunter changes what it means to change – then it changes. Grunter redefines language, communication, society, civilization, and redefinitions. Forever. Like a glorious raging phoenix violently re-birthing from the ashes of Twitter’s cremation, Grunter soars through the digital skies inspiring awe. The world is a hollow and bleak reflection of itself without Grunter. Grunter simply is.

The Question
Everyone agrees Twitter is great, but the messages can be SO long to type and read and they have all kinds of words and stuff. Why can’t it be simpler to share my inane thoughts?”

The Answer
Now it is.

The Basics
Using any one of our soon-to-be-award-winning apps you can send a “grunt” to your “trough”. Grunts can be public or directed to specific users. For convenience you can subscribe to other troughs, in the Grunter parlance this is called “bellying-up”. This allows you to see all the grunts you care about in one combi-trough. You can control who can belly-up to your trough and limit access to specific grunts. Grunted messages can be up to ten characters long, with no spaces.

The Technical Sounding Shit
Grunter leverages distributed systems running on scalable enterprise technologies to provide an unparalleled application framework platform in the cloud. We use a ton of cloud, seriously. Our software ecosystem lays a comprehensive groundwork for a myriad of rich user interface interaction vectors. By mashing up cutting edge engineering methodologies into a single test driven development pattern, we have invented a new process for creating software that combines the best aspects of waterfall, agile, and scrum approaches. We call it Scragifall (TM) and using it guarantees rapidly produced bug-free code even when working with untrained monkeys. Grunter is written in Haskell, then compiled to bytecode, de-compiled to Ruby, and finally run in a VM built in node.js.

The Proof
The best way to convince your frontal lobe that Grunter is superior to all social networking available today is to feed it some examples. Here are some common tweets converted to grunts to give you the idea:

tweet: I’m an idiot who thinks you care about what I put on my bagel
grunt: unggg??!

tweet: I am so going to kick the shit out of you
grunt: Grrrrr!

tweet: I forgot my bib and drooled on my new shirt
grunt: ehhrrm…

“I have never even heard of twit her or whatever, but I do make a lot of guttural noises throughout the day. Grunter was a natural fit for me and it makes communicating online comfortable and fun.”

“I loved using Twitter and the little blue bird was cute, but everybody kept tweeting WAY too much text at a time, I’m talking like information overload! One time I even missed the first act on a new episode of Idol because I was reading some long-ass tweet. Now that I’m on Grunter all that has changed. I can still keep in touch with random strangers AND I never miss a minute of my favorite show! Grrrr!!!”

“I’m not a speed reader, so it can take me a whole day to get through four or five tweets. By the time I finish reading what’s new in the morning I have twice as many stacked up to go through in the afternoon! With Grunter I can quickly read my messages and get on with my day. Thanks to Grunter I have a life again.”